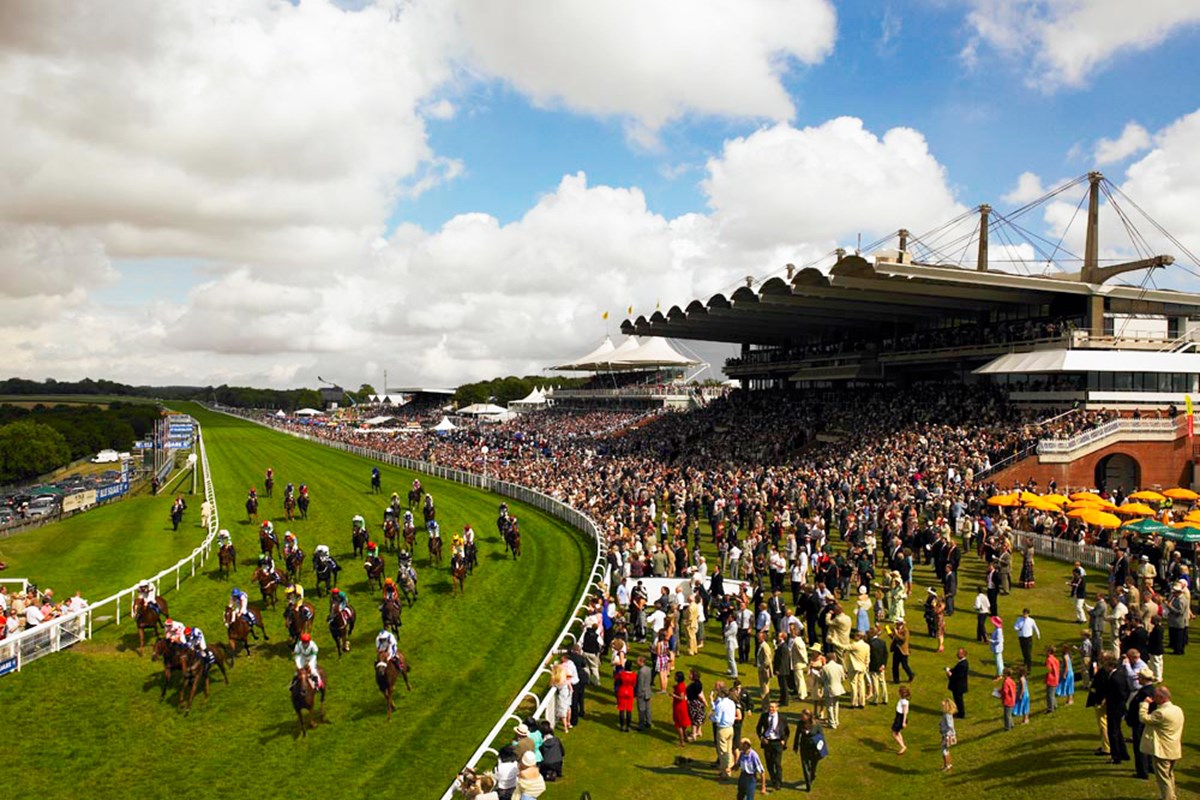 More LIVE horse racing action this weekend as the ITV4 cameras head to Goodwood, Newmarket and Beverley – we’ve got it all covered with the key trends and stats to help you whittle down the runners and find the best profiles of past winners.

At Goodwood, we've the Group Three Prestige and March Stakes, plus the Group Two Celebration Mile - a race that 10 of the last 11 winners returned 9/2 or shorter in the betting.

The ITV horse racing cameras are also at Newmarket to take in one race, while they are also up north at Beverley to show two races that include the Beverley Bullet Sprint Stakes.

SUREWIN VERDICT: Some promising 2 year-olds on show here. Hello You is certainly one for the shortlist after a fair 6th (of 10) in the G2 Lowther Stakes at York last time out. That also came having not had a clear run in the race, while this step up to 7f for the first time looks likely to suit. Clitheroe caught the eye on debut when second at Newbury a few weeks and having only just failed to get up that day over 6f will be another that should be suited by the extra furlong. Value Theory, CD winner Wilderness Girl and Mise En Scene have claims, but with a 60% strike-rate with his 2 year-olds at the track, the Simon and Ed Crisford-trained DANEH is the first pick. This 2 year-old was last seen running third at Deauville (France) in a G3, but that was only her second career start and the softer ground that day probably went against her. We know she stays this trip will and on debut was an impressive 4 ½ length winner at Kempton. The other interesting one is TINDERBOX (e/w), for Dettori and Gosden. This juvenile was another recent Kempton winner, when catching the eye to win a 7f Novices’ Stakes there easily a few weeks ago. She’s clearly well regarded to be making the leap up to G3 company and is another that won’t have any issues with the trip.

SUREWIN VERDICT: With 8 of the last 11 winners drawn between stalls 5-9, this is good news for ESCOBAR, OH THIS IS US, DANCE FEVER, ACCIDENTAL AGENT and AL RUFAA. We’ve also have seen 10 of the last 11 winners aged between 4-6 years-old, which is a negative for Accidental Agent, Oh This Is Us - the older horses, plus the 3 year-olds Aratus and Bravado. The one that stands out for me though is the Clive Cox-trained DANCE FEVER. This 4 year-old has been running constantly well in his last three races - placed in the top three each time, including a close second at Doncaster a few weeks ago. Draw 7 looks ideal and with just 9 career runs should still have plenty more to come. Of the rest, the Cox camp also run ARATUS, who might lack for experience, but has started his career well by winning three of his four outings. Another step up is needed in into Group company, but he showed a good turn of foot last time and looks fast-improving.

SUREWIN VERDICT: The Mark Johnston yard have won the last two runnings of this race and in Dancing King should have a good chance again here. This 3 year-old was a short-head runner-up at Chester last time at Listed level, but even though he’s been thereabouts in this races this season has just fallen short each time in Group and Listed races. Classic Lord has risen up the ranks this season overall as won 50% of his 8 career runs. He stays this trip well, but recent runs have all been in handicaps so would need to find a bit more now upped into Group class and being rated 10lbs off Dancing King. On a plus, he’s a course winner, has Oisin Murphy booked to ride and looks progressive. Juan De Montalban is another course winner, and his official rating gives him every chance, but he’s up a fair bit in trip here today, so staying this 1m6f distance is a slight unknown. The pick, therefore, is the Roger Varian runner - NAGANO. This 3 year-old is another that’s up in trip, but he did it well last time out at here at Goodwood to win over 1m4f and his running style (coming from off the pace) suggests he’s certainly worth a try over this distance - especially with that last win coming on soft ground.

SUREWIN VERDICT: Duke Of Hazzard won this race in 2019, but was only fifth 12 months ago - he lines-up again to try and win back his crown and having run a lot of solid races this season should not be far away. The negative would be that he’s not easy to win with - and is now 11 runs with a success, which was in fact this race in 2019. Stormy Antarctic and Happy Power are proven course winners that have to command respect, while the Charles Hill-trained Mutasaabeq is the only ‘last time out’ winner in the field. But the two I’m going to play here are the top-rated in the field - BENBATL - and the improving 3 year-old PEROTTO (e/w). The former hails from the Godolphin yard and even though he was last seen back in Sept 20 in the G2 Joel Stakes at Newmarket, he’s a horse that’s gone well fresh in the past so the 337-day break isn’t a worry. Oisin Murphy, who has a good record in this race, rides and being rated 118 does seem to have a bit in-hand on the ratings if running to his best form. Being a 3 year-old, Perotto, gets a handy 6lbs from the other pick and that should bring them a lot closer. This Marcus Tregoning runner has stayed on well the last twice, including here at Goodwood at their Glorious Festival at the end of July. In fact, he does seem to like it here as he’s also won at the track twice in the past and his overall form figures read 3-2-1-4.

SUREWIN VERDICT: 10 of the last 11 winners didn’t win last time out, so this might be seen as a negative for Extrodinair and Adaay To Remember. Course and distance winners - Summerghand and Khaadem - can go well, while the Godolphin 4 year-old - Royal Crusade - is interesting now gelded. But the call goes to the Owen Burrows-trained Tabdeed here, who is the top-rated in the field. This 6 year-old was a close third last time out at in a G3 at Newbury, beaten just a neck, and now dropped into Listed company that should give him a massive chance. Trip, track and ground are all okay and if he runs to the level of last time has to be considered the one to beat. Of the rest, the Richard Hannon-trained MUMS TIPPLE (e/w) hasn’t quite progressed as he looked like doing a few seasons ago, but I still think there’s more to come. This season he’s been running okay in slightly better races and last term, when dropped into Listed company won well at Wolverhampton. He’s rated 108 and that also makes him the second top-rated in the field - a bit to prove but capable of bouncing back in a race like this.

SUREWIN VERDICT: The William Haggas yard took this race 12 months ago and with a 38% record with their 3 year-olds at the track, their TITAN gets the nod. Yes, this 3 year-old is returning from a break, but rounding off last year with some solid runs at Newcastle and Doncaster. The step up in trip looks interesting and it could also be significant that leading jockey - Tom Marquand - comes to Beverley today to ride. Barn Owl has been running well this season too, with a win and a couple of seconds in his last two races, but this is another step up in grade here. Trainer Mark Johnston won the race in 2012 and runs two here - Mr Excellency and March Law. Both have the form to go well - March Law has clearly had some issues after not being seen since July 20, but was runner-up in the 2020 Chesham Stakes at Royal Ascot, so on that form would have a big chance. At a bigger price, LIFE ON THE ROCKS (e/w), might be worth a small interest too - this 3 year-old represents the Richard Fahey yard that has won this race twice since 2016. Yes, being rated just 76, he needs to find a bit more, but as a result gets in here with just 8st 2lbs to carry and receives a massive 19lbs off March Law.

SUREWIN VERDICT: We’ve the winners of the last two runnings of this race - Judicial (2019) and Dakota Gold (2020) - running here and both look to have leading chances again. The former - JUDICIAL - looks slightly better drawn though in stall 5 and also had the beating of Dakota Gold last time out in a Listed race at Chester - beating him by 2 lengths. He’s not getting any younger at 9, but, that said, found the winning thread last time out to win well to show he still loves his racing. Trip and track are fine and even though 7 of the last 10 winners have come from stalls 4 or lower, he’s only just outside this in draw 5. Tarboosh and Hurricane Ivor are fair sprinters, but it won’t be easy from high draws. Show Yourself has won his last three - all here at Beverley too - but this is a huge step up in grade and even though the track clearly suits would need more. Plus, being a 3 year-old might be against him with all of the last 10 winners aged 4 or older. Those draw 1-4 are Justanotherbottle, Lampang, Significantly and Ostilio - of that quartet, the Tim Easterby-trained LAMPANG (e/w) and Karl Burke runner - SIGNIFICANTLY (e/w) make the most appeal. The former has draw 2 and even though he was a beaten favourite behind Justanotherbottle last time out, the drop back to 5f will suit and the Easterby yard often do well at this northern track. Then Significantly will need to bounce back from being slowly away the last day at Ascot, but I feel is better than that and the time before beat Hurricane Ivor at Ascot. He’s got a nice draw in 3 and has been given a small break since that last outing.